Back from Wellington to Auckland, 1992

Here are my last New Zealand pictures from 1992, all of them from the North Island. Many thanks to Kelerei and atom_omeara of the NZSignals group who identified some of the locations—especially an unexpected shot on Google StreetView linked below.
The first picture is a quick snapshot of the locomotive yard in Wellington, where a lot of diesel locomotives are waiting to be used: 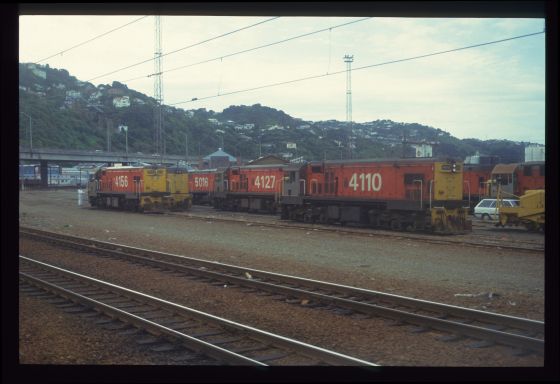 The next pictures are from the Johnsonville Branch, which I drove to the end and back. The first one shows an encounter, the exit signal far back on the left already shows "clear". 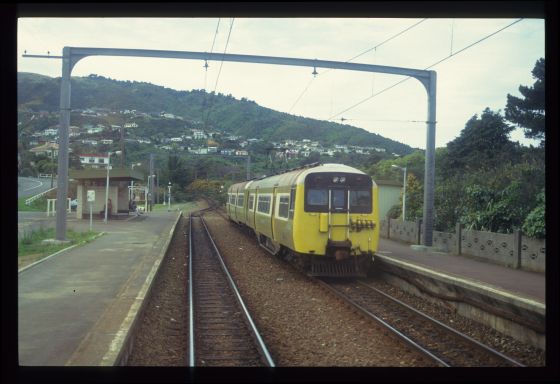 Currently and according to Google Streetview, this station looks like this.
In the next picture, we are already at the end of the line, where the single track ends at a buffer stop. 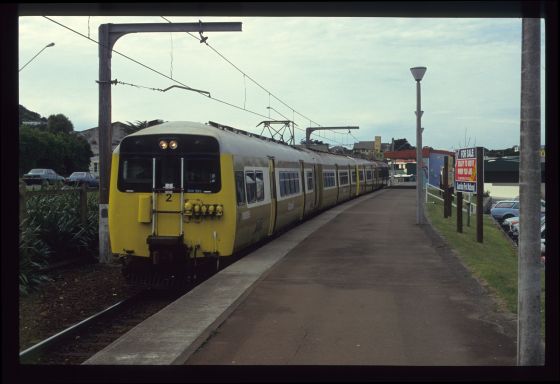 In the opposite direction, the signal towards Wellington is seen to have returned to stop due to the train visible in the distance: 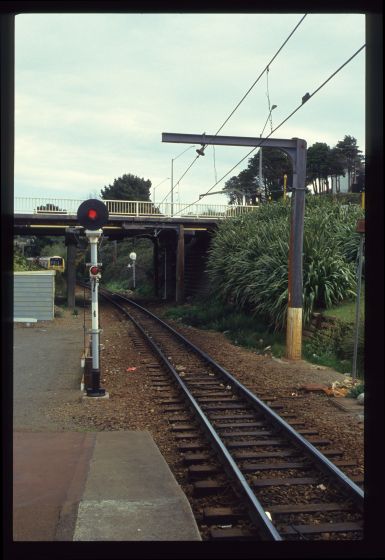 I probably took this turnout in Wellington. Most interesting is the lever similar to a Geneva drive on the left, which is important for the functioning of the whole turnout: Pulling the linkage on the left does not reverse the blades at first, as the roller only moves into the cut-out. During this movement, the locking bar is pulled out of the centre lock via the two angle levers so that the cut-out visible on it allows the connecting rod to move. The roller has now reached the cut-out and moves the blades. After the reversal, the roller runs "emptily" again on the Geneva drive while the two angle levers pull the locking bar further back, thereby locking the blade connecting rod again: 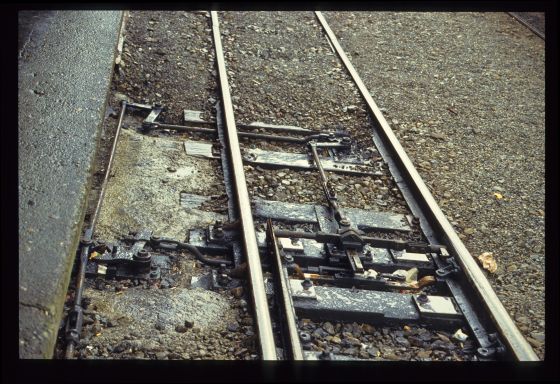 Turnout at or near Wellington, September 1992

In the rain, we then took the Overlander from Wellington to Auckland. A first blurred picture was taken still at Wellington, of the EMU stabling yard: 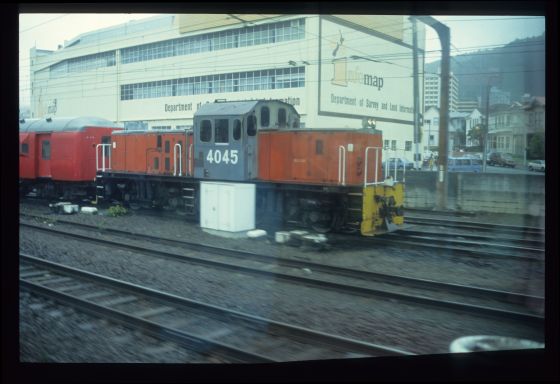 Also the nextpicture is from the train: It shows the northern signal box and the old goods shed at Paekakariki, today occupied by Steam Incorporated. At Paekakariki, the 1500 V electrification out of Wellington ends (the 25 kV electrification of the North Island Main Trunk begins at Palmerston North). The signal box, according to Kelerei, is now at the southern end of the platform at Paekakariki (the other box has been moved to Ohakune, where it stands opposite the station building): 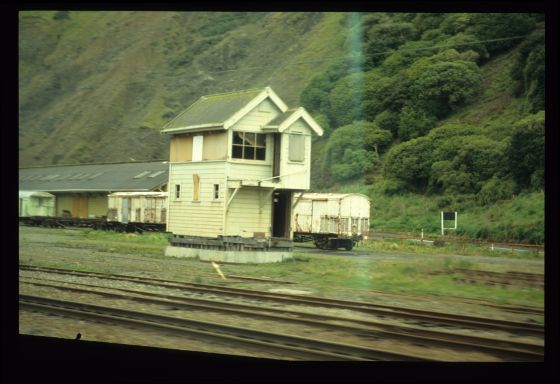 A little further on, already north of Palmerston North, our Overlander drives through New Zealand forests: 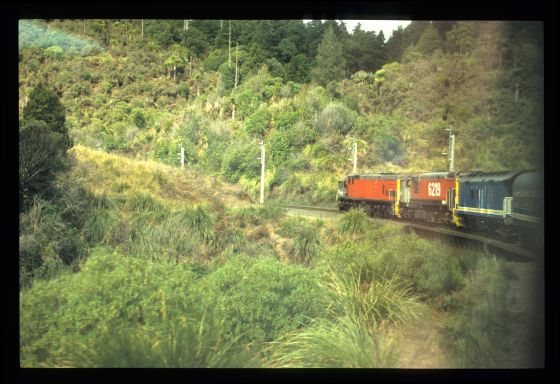 The following picture is almost certainly from Ohakune: 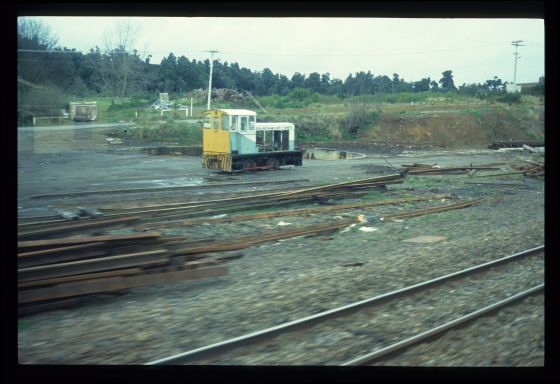 And here is the cool link!: Kelerei found at Google StreetView, that exactly this locomotive is still at exactly that place, only moved up the track a little!
Further north—I probably took the following picture of this electric EF locomotive at Taumarunui: 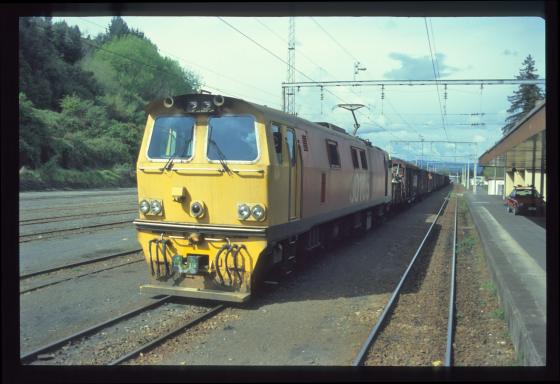 Much further north, a look at Huntly—things look a bit different there today: atom_omeara says the trees are taller, there is now a bypass road, a new suburban service from Auckland to Hamilton, and Huntly station has reopened as a passenger station: 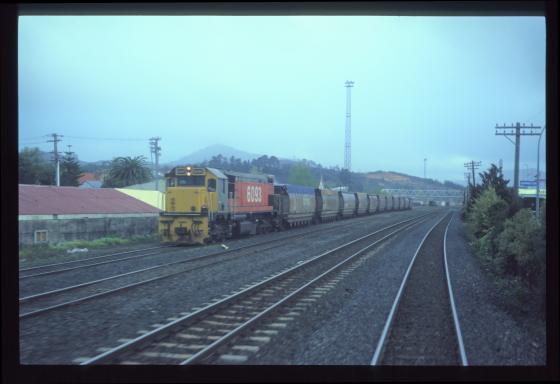 The last picture is finally from Auckland—it shows our train at the platform of the former main station. After the construction of the new main station Britomart, one of the old platforms became new stop "The Strand" in 2003, where nowadays only the Northern Explorer—successor of the Overlander—starts and ends: 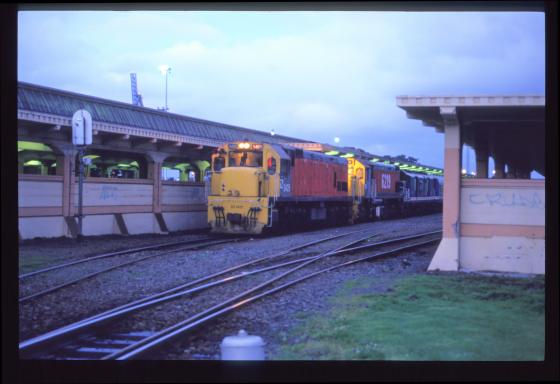 And that's it with my New Zealand pictures from almost 30 years ago.
Posted by Harald M. at 2:17 PM